The Goats of Christmas Past

Home/Inspiration/The Goats of Christmas Past
Previous Next

The Goats of Christmas Past

Recently while digging through some old photos, I found some that brought back some humorous memories.

My oldest two girls were very small when we moved out to the country, and being raised in the country myself, I was accustomed to having an assortment of animals around the farm. Animals can be both useful and entertaining. We decided not long after we moved out to our little hobby farm, that among other things, we needed some goats.

I thought dairy goats would be fun and wouldn’t you know it, we found two FREE ones! That should have been my first clue! Two Alpine does, I thought they were  sent from Heaven. Turns out, I think those particular two were more than likely sent from the other place! They wanted nothing to do with us from the beginning, and they had horns… long pointy horns, and they knew how to use them! Somewhere I have pictures of them, that I took as I was chasing them through the grove, trying to make friends, ha! Needless to say, milking them was not an option.

Fortunately I had a good friend who had a Nubian nanny goat she wanted me to have. She was a very sweet goat who’s name was Franny. We also came across a pygmy billy goat to add to the family.  Now if you have ever seen a Nubian and a pygmy goat together, you really have to wonder how they managed to become parents. Pygmies are very little, like a medium sized dog and Nubians are very tall. Well, he must have used a ladder, because Franny became the mother of not one, not two, but three bouncing baby goats!

That was a fun summer, those little guys loved us and would follow us everywhere! 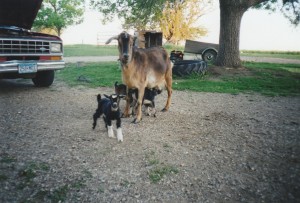 As soon as I would go outside I would hear  maaaaa!

Franny was a prankster though! She knew when the school bus was going to be here and she would stand and wait. One day, Heather, my middle daughter got off the bus with an art project she had made. Your typical little grade school project of construction paper and glue. She came running up the driveway, Mom, Mom! Look what I made! Just then here came Franny, who snatched it out of her hands and ate it! Heather’s art project was being munched on by a goat, and yes it’s true, they will eat just about anything, including construction paper and glue I guess!  Fortunately Heather found it funny too, at least later,  so no hard feelings.

Franny also liked to wait for the neighbor kids to get off the bus to their house across the road. She would chase them up their driveway just for sport! Why? No one ever figured that out, but as soon as they set foot off the bus, they were off and running!

We ended up with more baby goats through the years. Not knowing any better one year we accidentally had baby goats in December when it was way too cold in the barn. It was so cold that year that not even a heat lamp would help. We lost one, and the rest ended up in a corner of our basement as bottle babies, until they grew big enough to take the cold. Of course occasionally one would end up upstairs for a quick photo shoot! 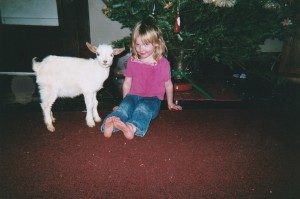 I think the older ones would have loved to come in  too if we let them. Every now and then we would see a little goat face peeking in the window of the front porch, hollering Maaaa! I don’t think our kids, human or otherwise would say they had a boring childhood here on the Minnesota prairie. They learned to be responsible, compassionate, and they certainly had a lot of fun! 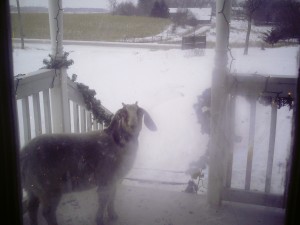 I’m sure I will have many more fun memories to share with you and many more to be made. Until then, I hope you all have a very Merry Christmas and a Happy New Year, from me,my family,  and the goats of Christmas past!

About the Author: Marcie Burnett